The Department of Environmental Conservation (NYSDEC), an agency of New York State (USA), is tasked with protecting public health and the environment.  Specifically, under the Division of Environmental Remediation (DER), NYSDEC staff are tasked with investigating and, if necessary, remediating sites that have been contaminated.  Contaminants of concern typically encountered include organic compounds such as benzene, toluene, ethylbenzene, and xylenes (BTEX) found at sites where gasoline is present.  Other classes of contaminates encountered include chlorinated solvents, such as tetrachloroethylene (PCE) and inorganic compounds such as chromium and lead.

To ensure that appropriate decisions are made concerning the investigation and remediation of contamination at sites managed under the DER, staff require an understanding of the spatial extent and overall behaviour of contamination in groundwater. One software tool that is particularly useful to NYSDEC staff is the GroundWaterSpatiotemporal Data Analysis Tool (GWSDAT), which is an open source (free), user-friendly, software application for the visualisation and interpretation of groundwater monitoring data (http://gwsdat.net/).

One is example is a former Shell and Exxon Mobil service station located in Plainview, Nassau County, Long Island, New York (USA).  Historical releases of gasoline resulted in contamination in soil and groundwater by petroleum-based compounds including, but not limited to, benzene, toluene, ethylbenzene, and xylenes (BTEX) and methyl tert-butyl ether (MTBE) at the subject area.  The release of gasoline at both sites resulted in a co-mingled plume that has adversely impacted the groundwater, which is a sole-source aquifer for nearly 1.3 million residents in Nassau County (see Figure 1 and Figure 2). 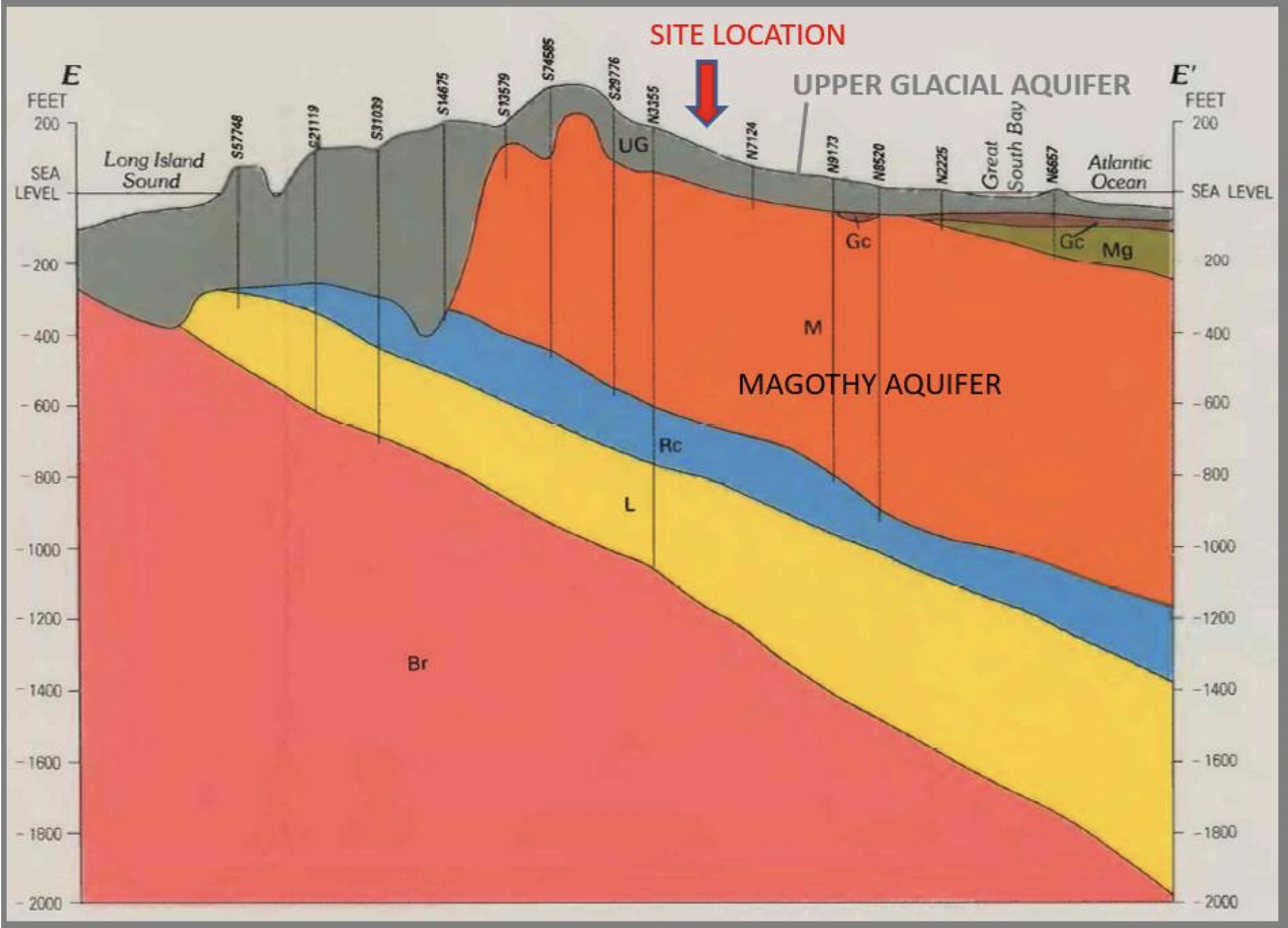 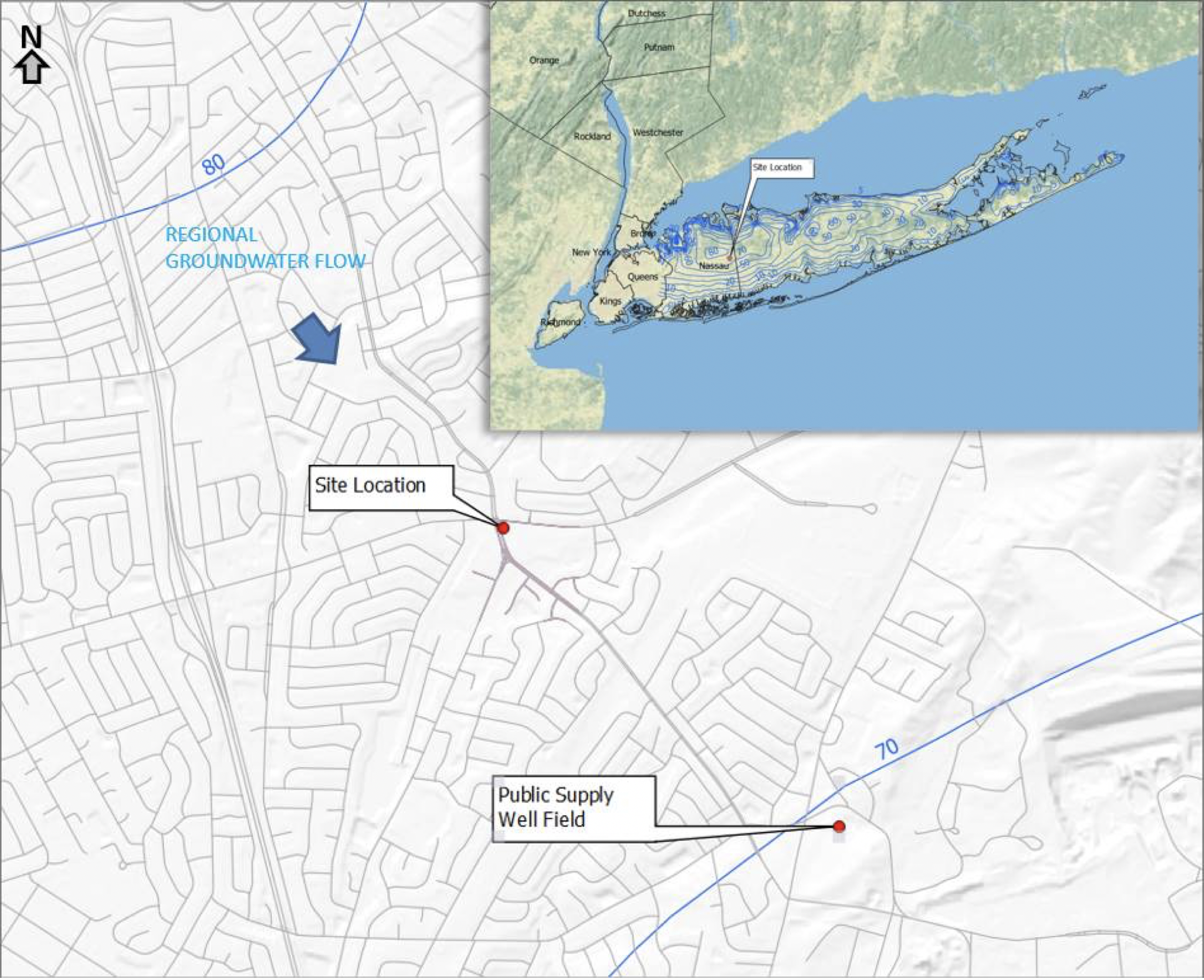 Sarken Dressler is a Professional Geologist at the DER who manages the investigation and remediation of multiple petroleum-impacted and hazardous waste sites on Long Island, and has considerable involvement in the issues which have arisen at the subject site.  Between 2001 and the present time, substantial investigation and remedial efforts were completed to address contamination identified on-site.   When Sarken took over the management of the site, efforts were being taken to address the BTEX and MTBE groundwater plume that had migrated off-site beyond the source areas remediated (see Figure 3).  From a feasibility perspective, the preferred, final remedy was to rely on natural attenuation processes to address the off-site plume.  However, there were substantial questions (and therefore uncertainty) concerning the appropriateness of relying on natural attenuation processes.  Among these were:

(1)  Was the off-site benzene plume adequately delineated vertically and laterally based on all available data?

(3)  Was the benzene plume off-site, as defined at present time, stable and/or shrinking?

In light of a potential public supply well being impacted in the future by groundwater contamination stemming from the site, these questions needed to be resolved. To address some of these uncertainties and to make an informed decision about the future direction of the project,  GWSDAT was utilized. From previous experience using GWSDAT, Sarken stated, “software like GWSDAT is an invaluable tool for sites that pose a threat to public health, such as evaluating groundwater flow direction over time, understanding concentration trends quantitatively, and assessing the spatial and temporal plume distribution. Sarken continues with, “the other, perhaps unrealized benefit of GWSDAT is that, among other things, it can provide alternative insight into the fate and behaviour of the plume to that provided by environmental consultants using other software and assumptions.”

Based on the analysis completed utilizing GWSDAT, it was apparent that the off-site benzene plume was not adequately defined laterally and vertically (see Figure 3 to Figure 5). For example, at the deepest set of monitoring wells, benzene was detected at least 3 orders of magnitude above the groundwater quality standard of 1 part per billion (ppb).  Also, the benzene plume was not delineated to the northeast.  It also was evident that, as the shape of the benzene plume (see Figure 5) was not elongated along the trajectory of groundwater flow (southeast), it was likely to be diving below the existing monitoring well network further to the southeast.  Therefore, deeper wells were required further to the southeast.  It is worth noting that recent data collection in 2019 revealed a deeper benzene plume at elevated concentrations at 200 to 225 feet below ground.  Lastly, the GWSDAT analysis indicated that concentrations of benzene were not decreasing with statistical confidence in the deepest portion of the aquifer (see Figure 6). 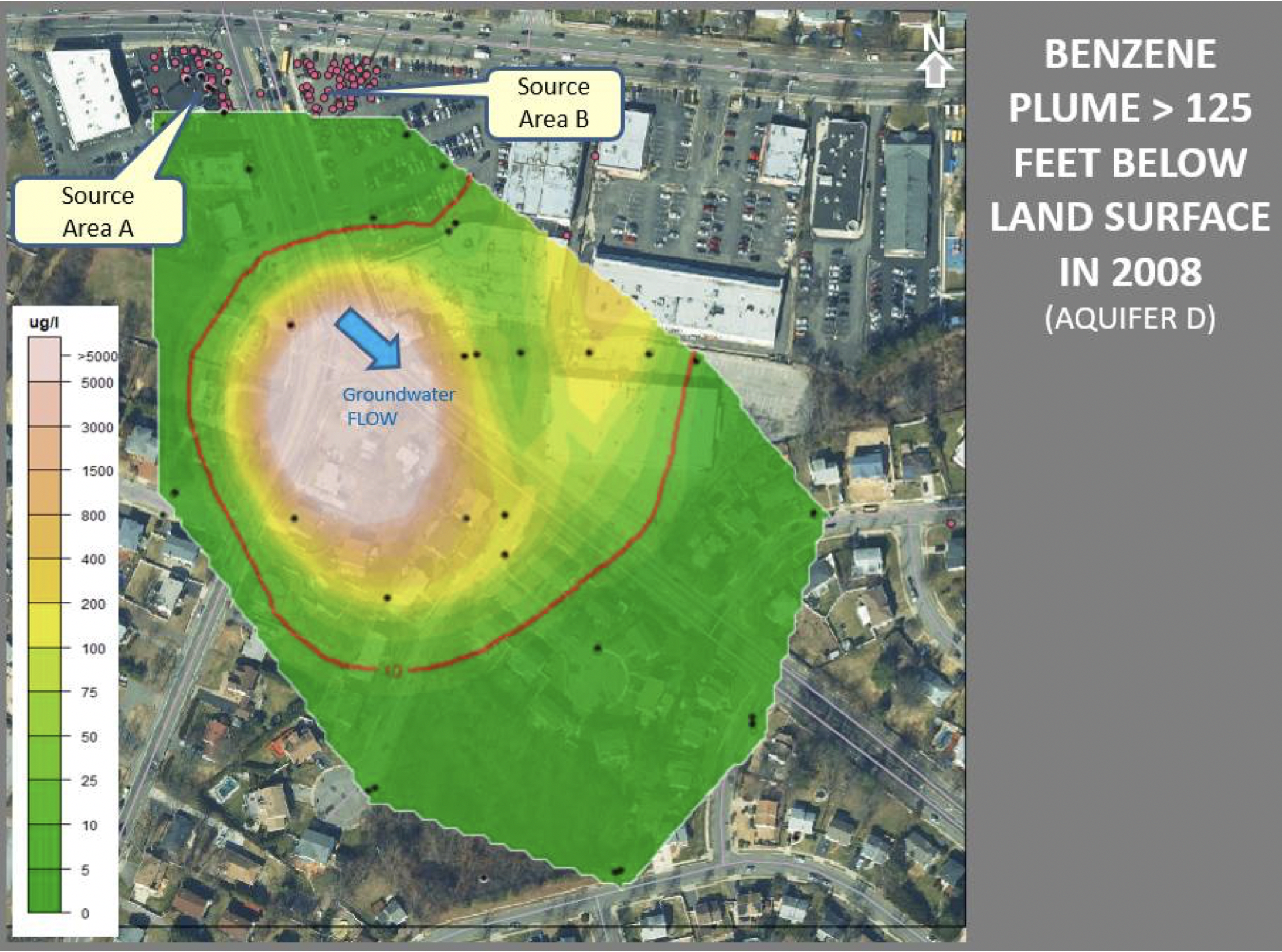 Figure 3 – Modeled Distribution of Benzene in Groundwater In 2008 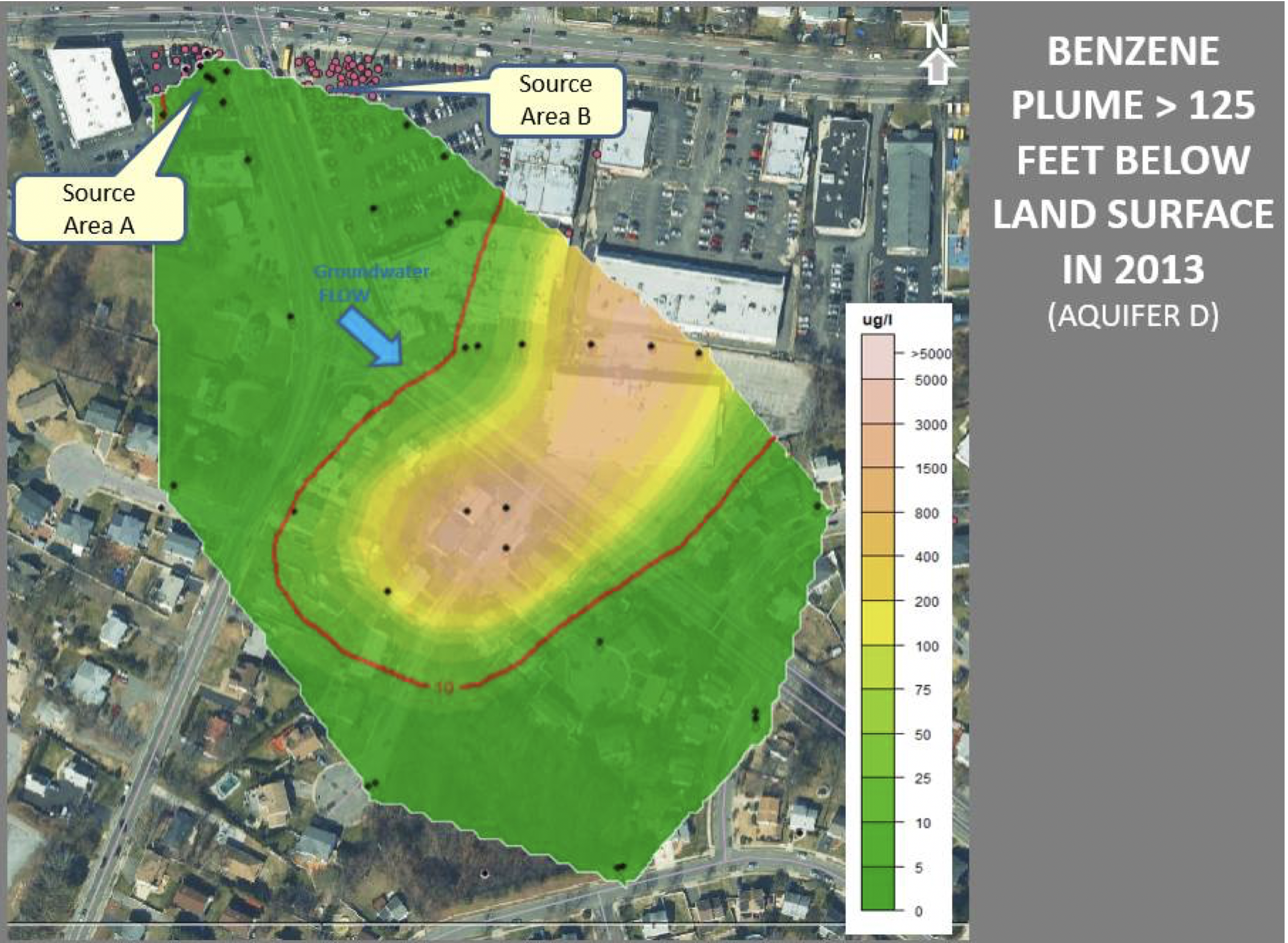 Figure 4 – Modeled Distribution of Benzene in Groundwater In 2013 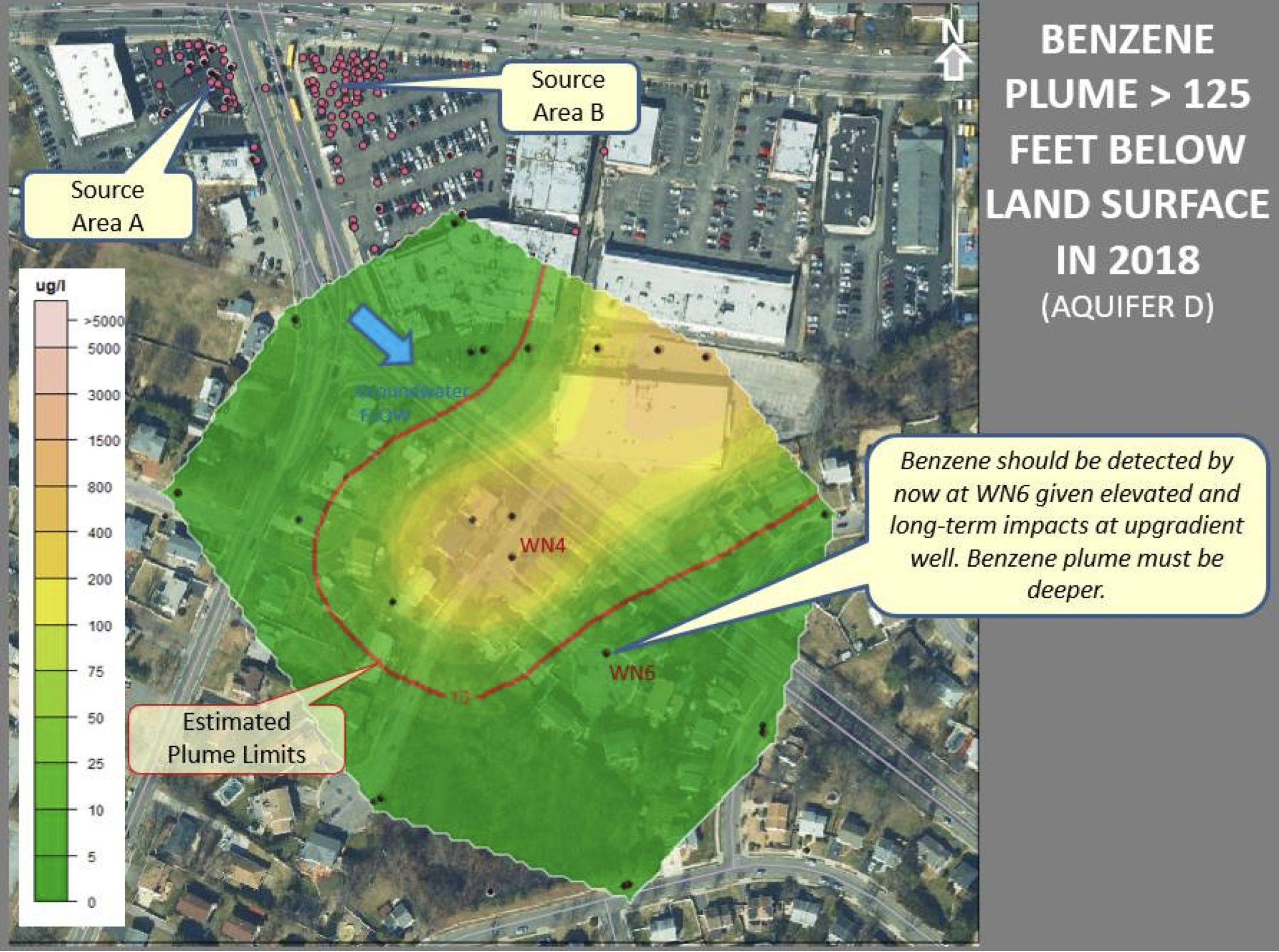 Figure 5– Modeled Distribution of Benzene in Groundwater In 2018 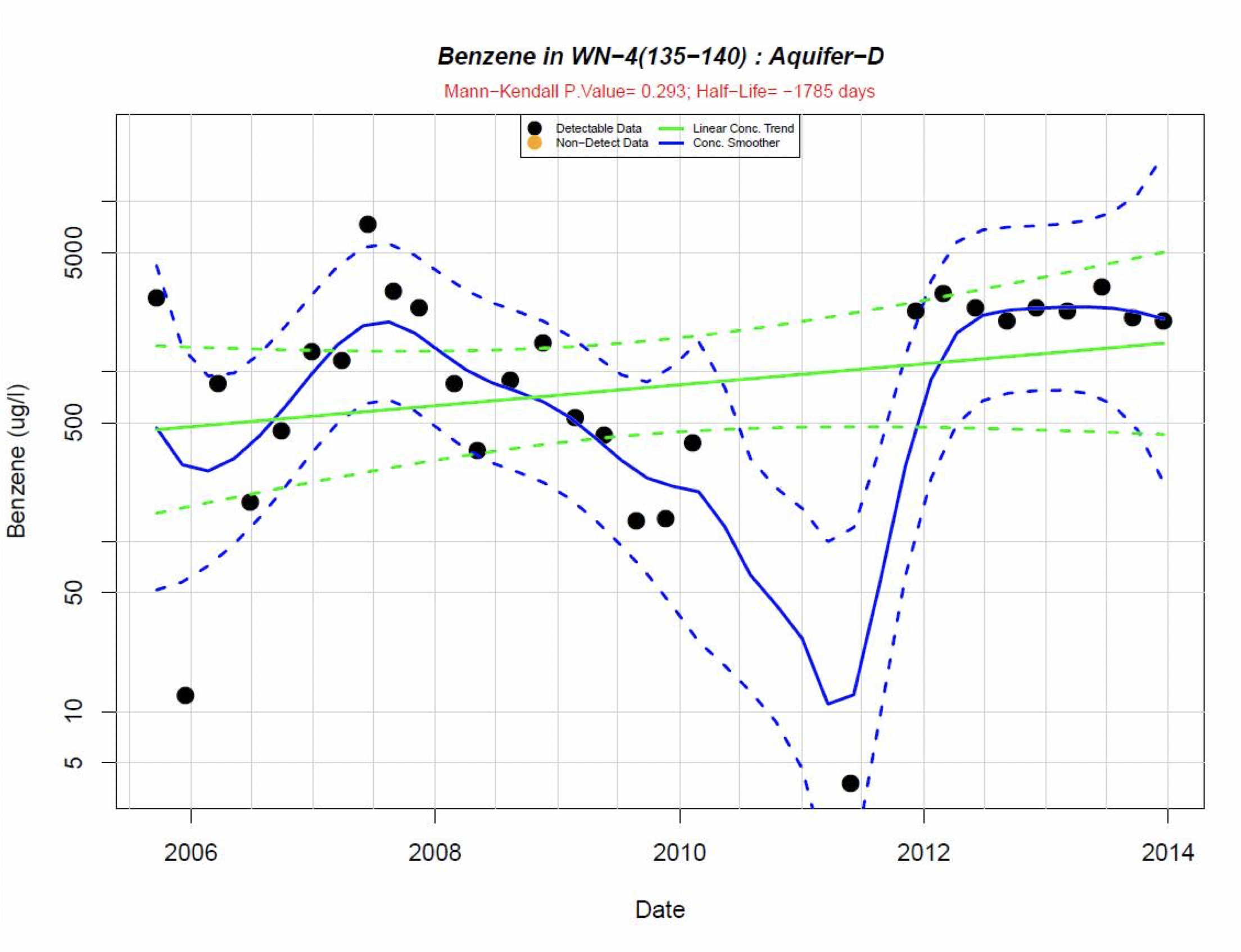 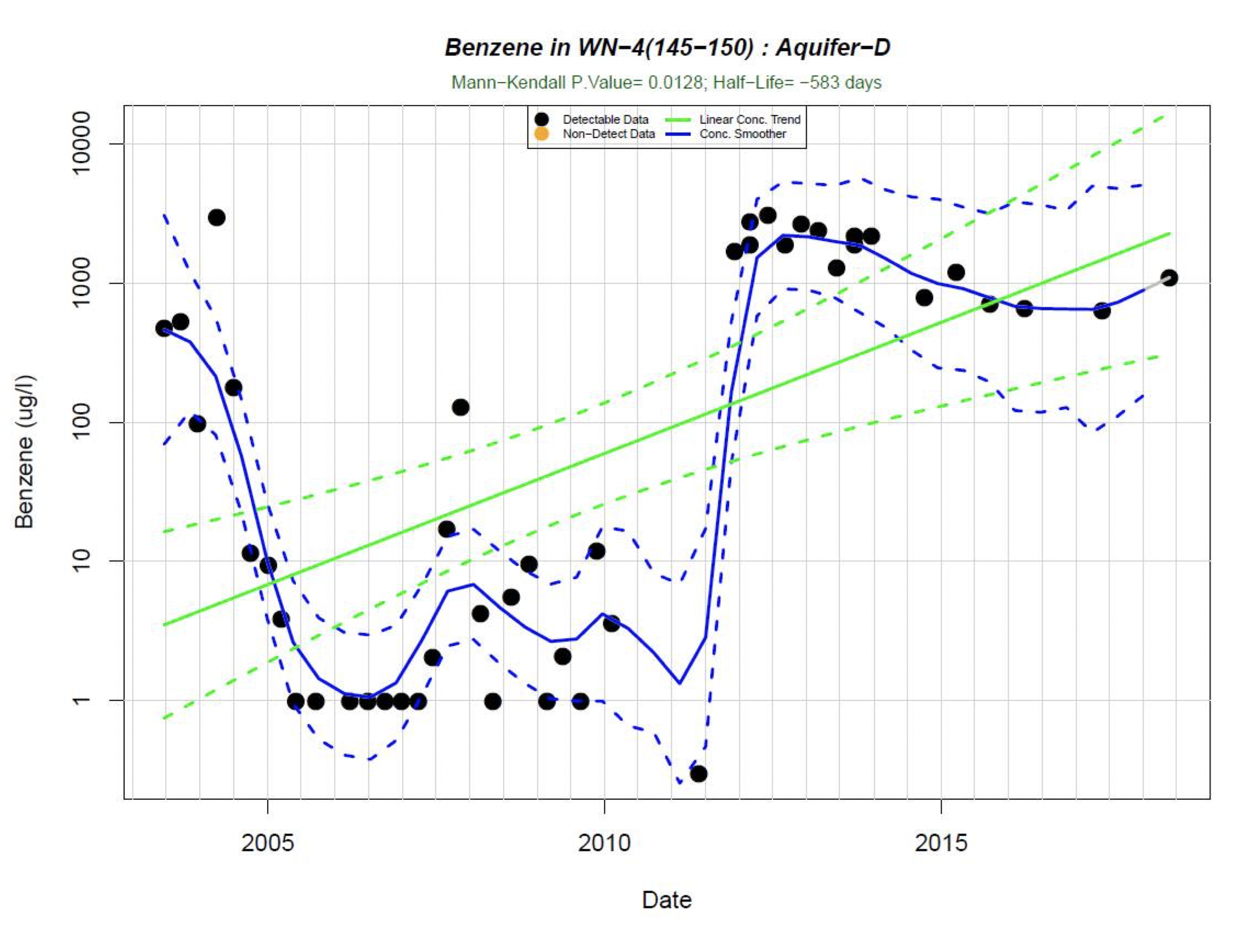 Sarken states, “GWSDAT has been implemented at the subject site to answer important questions about the residual nature and fate of the BTEX plume and, seeing the need for more data, to direct further investigation activities with precision.  As a result, fewer wells have been required to be installed, which resulted in savings of at least $150,000 in drilling costs.  Moreover, GWSDAT will be used to support future decision-making that could save millions of dollars’ worth of remediation work.  For example, assuming that natural attenuation is a viable alternative to address the off-site contamination as based on the GWSDAT data analysis, this preferred remedy would save the client over $1,000,000 in remediation costs compared to alternative, more proactive remediation efforts.”